At the Château-Abbaye de Cassan, there is a 12th century Romanesque church, the last vestige of the Royal Priory, and a conventual palace which earned the name of a small ``Versailles in Languedoc``.

The origin of the Priory dates back to the 11th century, when in 1066, the Alquier family donated the church to some Augustinian canons. Then they founded an independant priory. After the French revolution, Cassan was recognised as a chateau rather than as an priory.
Through the centuries, Cassan was built, razed, re-built, burned down and is still being rebuilt.

From 1953, various decrees were issued with the result that almost the entire site, and certain interiors, came under the classification of Historical Monument.
Today, the monument allows us to understand the importance and the radiance that the monastery may have had in the past.

We hope to open to the visit starting the 8th April 2023, for a new tourist season. You can find all our opening details here.
You are welcome  for a visit, a guided tour for group, a concert, near Pezenas. 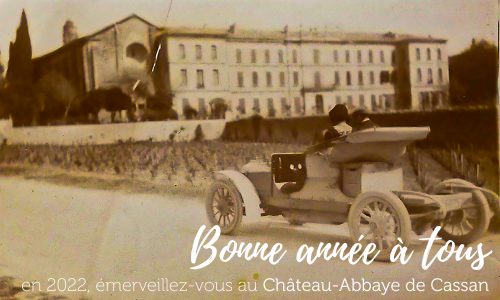 We wish you a happy new year